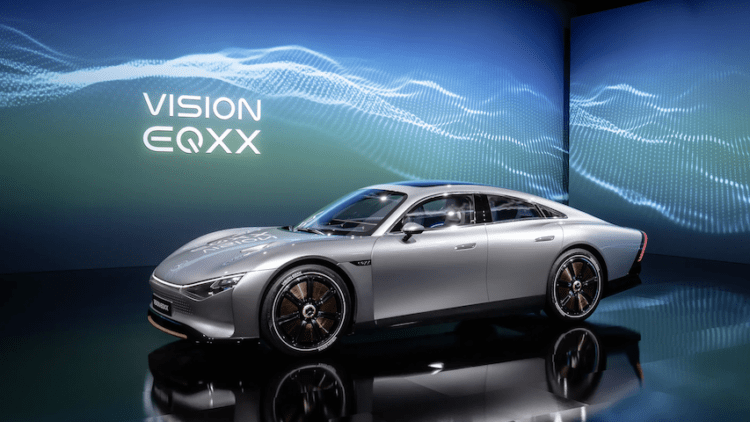 The Vision EQXX, a solar-powered concept car that can travel more than 1,000 kilometers (648 miles) on a single charge, was unveiled by Mercedes-Benz.

Mercedes finally unveiled the vehicle (virtually) at the Consumer Electronics Show in Las Vegas after several weeks of teasing.

The Vision EQXX is likely to serve as a basis for a production car that could end up competing with other luxury EVs like the Porsche Taycan, Audi E-Tron GT, and Tesla Roadster, thanks to its sporty intentions and sleek, futuristic design.

However, Mercedes claims that the Vision EQXX’s superior range is “completely realistic” and that many of its technological advancements will be implemented in future production vehicles through the Mercedes-Benz Modular Architecture.

To achieve this level of efficiency, Mercedes claims, it didn’t just cram an enormous battery under the vehicle’s floor.

Instead, it worked hard to maximize efficiency in the drivetrain, the energy density, aerodynamics, and the lightweight design of the vehicle.

To be sure, the EQXX gives us a glimpse of what’s to come from the design department, as do many other concept cars.

According to Mercedes, the headlights and front bumper give us a good idea of where the company’s front-end design language will go next.

The Mercedes Vision EQXX is packed with futuristic features that are either too cumbersome or ridiculously expensive for mass-market passenger cars.

Gahez, an Egypt-based e-commerce startup and B2B fashion marketplace, has raised a pre-Seed round of $2 million