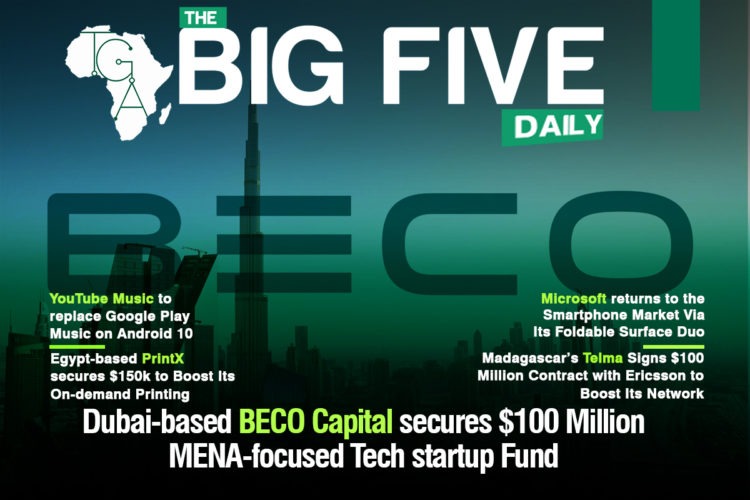 Welcome to another edition of the Big 5 Daily!

Are you ready for the biggest innovation gist in Africa?

Big news! Early-stage venture capital firm based in Dubai, BECO Capital has secured $100 million for the Middle East and North Africa (MENA) focused tech startup fund, tagged ‘BECO Fund II’. They will utilize the fund to invest in diverse startups at the seed and Series-A stage.

Have you heard? Telma—Madagascar Telecom company, has signed a $100 million contract with Ericsson. The contract will last for years (2019-2023) and will grant Telma the opportunity to boost its network and Radio Access Network (RAN).

Drum roll! Microsoft has made a grand return into the smartphone market through the launch of its Foldable Surface Duo. The device will run on Android OS with access to the Google PlayStore. The device will officially launch in 2020.

Finally, Google is replacing Google Play Music on Android phones with YouTube Music. The app will be pre-installed on new Android 10 and Android 9 Pie devices that run on full Google services. The new feature will be available on Google Pixel Series.

That’s it for today’s edition.

Hope you had fun?

Come back tomorrow for More!